There is an aspect of Wednesday’s world cup semifinal scarcely captured in today’s newspapers. During the match hardly any faults were committed. Germany and Spain played an astonishing clean game, to the point that one wonders why there are so many faults in the average match. The fault is not a simple accident, not the evidence of how evil a footballer is either. Most faults are tactical. They can be done to, for example, overcome a deficiency. If a forward dribbles a defender and gets in a better position to run heading the goal, the defender has two options: compete and chase the player or commit a fault. Another use of the fault is to reset a situation that plays against you. Your opponent has taken the ball from you in the middle of an attack. Most of your team mates are not in defensive position. You kick the opponent with the ball in the ankle and gain half a minute for your players to trot, retrench and wait for the attack, but now organized. These two uses are in a way non competitive. To actually compete in the first case would mean to chase the forward and the fastest player would eventually get the price. You get him or her, good for you. You don’t, well, that’s the game. A fault would in this view be a resource to even out a situation where one of the teams has an advantage.

Yesterday we did not see faults because both Germany and Spain thought that they were the best teams in the world and only playing was enough to win. Xavi, Iniesta, Schweinsteiger, Özil are too good to use such a cheap resource. They just play. Twenty minutes went on without a fault, just forty meters passes, dribbling, one-twos… pure game. Pure competition. Pure joy.

The Swedish Government took the decision in autumn 2009 to do changes in the communication and opinion building support to Civil Society Organizations. Diakonia uses these funds to increase awareness of how global structures hinder development. The first change was to broaden the beneficiaries of the budget line from the frame development organizations to city councils and corporations. That is good. That is competition, that is game. To organizations like Diakonia it means a painful 50% budget cut on this line of financing because we are more to share the cake, but good, let’s play. The second change is to limit the content of what is financed with it to exposing, communicating. Opinion building cannot be financed with tax money. It is allowed to account for all the bridges, trainings, medicines, researches and schools that have been financed with development funds. But to question if these are the best options, to propose a different view to members of parliament, journalists, constituencies, it’s not. Now this is a fault. This is tactical. To allow us to write about the number of solar kitchens delivered but not about the politics of oil, the alpha male show off between China and the States in the climate change negotiation, is pushing us out of the core of the solution to development. And pushing us out not by outplaying civil society in an open and informed debate but by committing a fault. We make faults when we know we do not have the upper hand, or when we know we can lose it.

But here we get to the limit of the comparison. There are a difference between football and development. In football 32 teams compete for one trophy that one will win and the rest will not. Development, simplified, is one trophy but shared by all involved. This brings to the scene competition’s twin sister, collaboration. The different development stakeholders are both competitors and collaborators. There is an important competition among ways to deliver development, do not underestimate it. It is important because the most time and resources we waste the more people will continue leaving weakened, threatened or unprotected. But competition should not occupy such a space that makes collaboration of the different squads impossible. It might sound naïf given the context, but anyone working to do away with poverty is a hundred times more an ally than an enemy, so one wonders where all these faults come from.

Going back to football, the score last Wednesday could have been Germany 0- Spain 1- Football 3, being the sport itself the greatest winner. If it’s ok to get new age, rather than two teams playing football it was football itself playing through two teams. The German coach Joachim Löw, who loves the game, said after the match that Spain is the best team in the world. Diakonia promises to say that Gunilla Carlsson is the best Development Minister in the world if she thinks again who is really helping to limit the debate about development and acts accordingly. We also love the game. 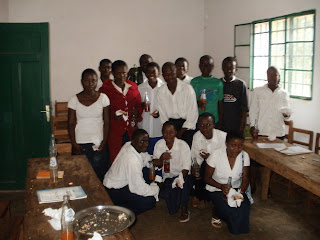 In a lecture at the university a fellow student was exposing the social and economic structure of the conflict in Sri Lanka. In an effort to make his point clear once and for all, he lifted his hands as if he was holding a big water melon, looked at the audience and said “things are not black or white, you know”… paused and added “they are grey”. The lecturer raised his hands and interrupted “no, that’s not true. Things are colorful”. The speaker could not make much sense of the comment, being all nervous as he was, nor could the audience, and an awkward silence expanded for some seconds.

This simple though far-reaching assertion stuck beyond what I could think at the time. It does not go a week where I wonder, if things are made of colors and combinations of colors, why do we find ourselves so often discussing how grey they are? Or worse, why do we find ourselves pondering if they are white or black? China or the States? Real Madrid or Barcelona? Alliansen or Rödgröna? Mountain or beach? Against the possibilities that one would think the world gives, we are offered two, or a combination of them in different proportions, which we call “center” or ”moderate”.

Like boxers, we are pushed to the corner so our options are limited. The boxer in the corner cannot step back, cannot step to the sides. Can just take the punches and wait for a mistake of the opponent. Today we had breakfast with another session of the old game. Hans Bergström in Dagens Nyheter reasons that the solution to development is to do away with development aid. The first big dose of (let’s call it that) the black or white syrup comes soon. The article assumes that aid is one monolithic thing. No nuances, no angles, no difference of strategies, or players, or contexts. Aid is one thing. Big, according to numbers, but one. Loans of the World Bank to states are the same as loans of micro credit of a local bank or association to women or fishermen. Safe motherhood projects to decrease the number of women and babies that die during delivery are the same as construction of dams in dry areas. Economic literacy of communities the same as purchase of school material. Organization of citizens at community level is the same as organization of states in regional communities. By doing this Bergström is denying the rainbow of aid. He is saying that aid is a big mistake. None of the above seems to work.

The second big dose of the black or white syrup comes with the solution side: we would eventually fix poverty by a radical liberalization of the European trade policy. Again, a simplified version of reality, a single sided tool that will do the trick no other has done in fifty years. Poverty is in reality multidimensional. There is an economic dimension of poverty, but a physical and psychological dimension of poverty too. They are related to democracy, culture, health and others as much as to economy. Experts and authorities do not come to an agreement of what comes first: if a healthy economy will eventually deliver a healthy democracy or the other way around. If healthy and educated people will take the country to an steady economic growth or the opposite. But Bergström seems to have missed this never ending discussion. For him all this fire work that are the different understandings and solutions to poverty comes to a) do away with aid in 5 years and b) do a radical liberalization of European trade policy. Doesn’t it look like these two have been hand picked from a basket of colors?

Bergström of course knows better than that, and us should know too. He is taking advantage of that we are already pushed to the corner. We do not have a nuanced view of poverty and aid and we take what we are given. And that applies to most of the political arenas: social security, health, culture, trade, investment. But why would the docent in Political Science do that, simplify too much and propose a one-dimensional solution to poverty? This question, my friend, is for you.

Coming to the aid debate, of course aid needs to be reviewed. So does FIFA and UEFA regulations, screenplay writers collective agreement, the price of the Yuan, bostadsförmedlingen, even the EU trade policy, especially when it comes to coherence with EU aid policy.